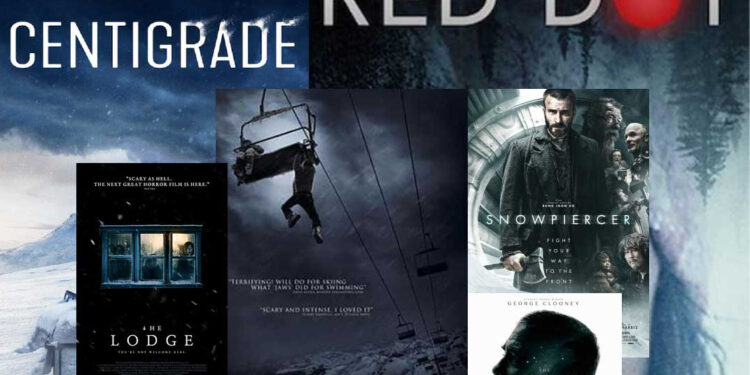 With much of the country covered in a blanket of snow, experiencing extreme cold weather conditions, chances are many people who still have electricity and can’t leave their driveways are entertaining themselves with streaming services. Here are a few films involving snow and ice guaranteed to give you thrills and chills during a snow storm.

Frozen – No. This isn’t the animated Disney movie your child has made you watch 5,489 times. If you search for it, you may have trouble finding it among all of the Anna and Elsa references. A tip. Search for “Frozen thriller.” When three college students get stuck in a chairlift at a ski resort that has closed indefinitely, they must figure out a way to survive the cold and wild things that howl in the night. Given that most of the film takes place in a ski lift, it was interesting to see how the director utilized “the set.” Link to Trailer

The Lodge – Starring Riley Keough, Elvis Presley’s granddaughter, a young woman named Grace, who will soon become the stepmother of two children, is left alone with them in a cabin during a blizzard. Without her medication, she slowly begins to lose her grip on reality. Alicia Silverstone is in this movie, but not for long, although I won’t give away the details. I thought this was an interesting film with a great performance by Keough, whose acting reminds me a little of Kristen Stewart. It’s understated, but effective. It’s a film about the consequences of lying. Link to Trailer

Centigrade – I find movies that take place in confined or limited spaces interesting, like “Frozen” above. Centrigrade is also one of those films. The set is basically the interior of a car. It’s interesting to see how the director will move the story along, and how the actors creatively keep the film engaging. A man and his pregnant wife become trapped in their car when a storm buries them underneath layers of snow and ice. This movie made me think about all the survival tools I should put in my car. I’m going to start working on that first aid kit. Link to Trailer

Snowpiercer – Many have called this film a masterpiece. It reminds me a lot of “The Platform,” a pretty new release, or “Hunger Games.” A battle of class warfare is played out on a train hurling through a new ice age with the only remaining survivors on Earth. The haves live in the front of the train enjoying luxuries, while the have-nots are in the back of the train literally eating each other to survive. Link to Trailer

The Midnight Sky – You’ll journey with George Clooney through the frigid terrain of a futuristic Earth impacted by climate change in “The Midnight Sky.” Clooney stars and directs this 2020 science fiction film based on the 2016 novel “Good Morning, Midnight” by Lily Brooks-Dalton. He ventures through the Arctic Circle to warn off a returning spaceship following a global catastrophe. The film also stars Felicity Jones. I enjoyed Clooney’s performance in this film and the mind-bending story. Link to Trailer

Red Dot – You’ll probably want to light a fire before you watch Red Dot, a Swedish psychological thriller that follows a couple on a romantic trip that takes a bleak turn. Nadja and David are celebrating their future together on a trip to the Swedish mountains when they find themselves in a number of difficult situations that leave them fighting for their lives from revenge-seekers. The movie unfolds in an unpredictable, interesting way. Link to Trailer