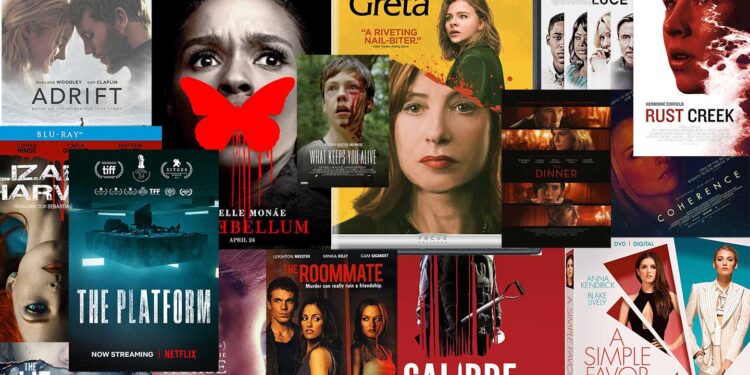 With many people staying indoors, chances are you may be looking for something to fight boredom. Here are a few interesting movies I watched in 2020 that may help entertain you during quarantine.

1. Rust Creek – It’s every woman’s nightmare to think about driving solo, have their car break down in the middle of nowhere, and be forced to rely on a passerby – who may or may not have good intentions – emphasizing the importance of a roadside service plan. Sawyer is headed cross-country for a job interview when her GPS takes her down the wrong road. (I hate when that happens.) She is approached by two guys who initially seem well meaning, but when she instinctively refuses their help, they become menacing. Sawyer breaks free and escapes into the cold wilderness, where she is later rescued by another stranger. You are not sure who to trust in this movie as it unfolds. It reminds you a little of “The Texas Chainsaw Massacre” without the gore. Maniacs have been replaced by backwoods outlaws and meth dealers, but not everyone with a character flaw is inherently bad. Link to Trailer

2. Adrift – One of my favorite movie scenarios involves people braving the ocean. I think this is because it is vast and potentially dangerous in the same way astronaut movies are. When a new couple is asked to sail a boat back to California, we go with them into perilous waters after a record-breaking deadly hurricane. I was lured into this love story by the lead performers. The film is another tale of surviving nature. Link to Trailer

3. Rebecca – A woman is swept off her feet by a wealthy widower in this remake of an Alfred Hitchcock classic and novel adaptation. She quickly marries him and moves into a English mansion filled with people who are mysteriously unwelcoming. Her husband is

so uncommunicative, he might as well be an inanimate object. After various conversations with people around the estate, she begins to believe his late wife, Rebecca, was someone adored who could never be replaced, and because her husband won’t talk about her, Rebecca’s flawless image slowly begins to chip away at the new bride’s self-steem and worth. But things aren’t always as they seem. Rebecca is also a love story gone wrong about memories that haunt us and psychological issues we sometimes refuse to face. There’s also a lesson about red flags. Don’t marry someone you’ve only known a few weeks because they could turn out to be a murderer. Link to Trailer

4. We Summon the Darkness – Set in the 1980s, this movie, part horror and dark comedy, uses the “satanic panic” and “ritualistic murder” idea prevalent in an era when many religious groups demonized heavy metal music and those who listened to it. A group of friends attend a concert, meet some guys and invite them back to their home, which proves to be a mistake. The tone of the movie is a little like Matthew Lillard’s performance at the ending of “Scream” when the true killers are revealed, and the lines of good and evil are blurred. Link to Trailer

5. Elizabeth Harvest – Abbey Lee gives a great performance reminiscent of Mia Farrow in “Rosemary’s Baby” in this film that includes many 1960s horror elements. The first creepy thing that happens is she marries a man who could be her grandfather. Secondly, he forbids her from entering a specific room in his mansion. Curiosity can be deadly. The film is well paced because you don’t suspect that it will morph into a different genre. Interesting cinematography. Link to Trailer

6. What Keeps You Alive – An interesting thriller, yet one of those movies in which the lead character seems to make a string of bad decisions while trying to escape a psychopath. If you’re reading this, and you ever find yourself in a situation where you are being chased by a crazy person, head to the nearest police station. Don’t return to the house or woods where you were initially attacked. If you actually find a car that cranks, floor it and find the sheriff, or just go to Walmart. You’ll be safer in Sam Walton’s parking lot. Jackie and Jules are celebrating their first anniversary at a secluded cabin in the woods, but Jackie has issues, to put it mildly. Link to Trailer

7. Calibre – When two friends go hunting in Scotland, a tragic mistake changes their lives. I like that this British film takes a common situation, such as hunting, and imagines what would happen if something tragic happened. While one character chooses the moral route, the other does not, pulling them both into a web of lies. Link to Trailer

8. Pretty Little Stalker – This one seems like a Lifetime movie, but Lifetime movies can be pretty good. A young woman takes an interest in the family of a self-help writer and manipulates her son in an act of revenge. Link to Trailer

9. The Roommate – Similar to the 1990s thriller “Single White Female,” the film stars Leighton Meester and Minka Kelly, who become Los Angeles roommates. When one of the girls begins to make more friends, the other becomes jealous and begins to exhibit disturbing behavior patterns. Link to Trailer

10. The Killing of a Sacred Deer – I wasn’t sure what was happening in this strange film until I realized it was a Greek mythology interpretation.

Then it made sense and was unlike anything I’ve ever seen. Directors have attempted to modernize classics like Shakespearean dramas, such as “Romeo and Juliet,” but this is a different type of surrealistic modernization. When a doctor and his family become the target of a young boy, he begins to ruin their lives in inexplicable, allegorical ways. Link to Trailer

11. The Platform – Another allegory about the haves and have-nots. In this dystopian world or prison – we are not sure what has happened. The haves live at the top of the platform, and the have-nots at the bottom. Those on top receive fine meals, but as the platform descends floor to floor, those below receive only their leftovers. A revolt occurs. It is described as a Spanish, social science fiction, horror film, and it reminds me of “Snowpiercer,” which explores the same idea on a moving train. Link to Trailer

12. Horse Girl – This interesting, quirky film is about a lonely girl who either descends into madness or

begins to experience an alternate reality. It also transforms into a different genre depending on what you perceive to be happening. Sarah is a shy, awkward girl in mourning following her mother’s suicide. Link to Trailer

13. A Simple Favor – I was intrigued by the promotion for this film that delivered several twists and turns. Stephanie befriends a beguiling young woman from her moms group who is searing with confidence and leads an alluring life. The mystery really begins when she goes missing. Blake Lively gives a standout performance. Link to Trailer

14. Luce – I predict Kelvin Harrison Jr. will win an Oscar one day if his performance in “Luce” is any indication. He has created a complicated, nuanced character. Luce is a school leader and model student, but when his teacher accuses him of malice, his family begins to question his actions and motives. This is one of the most interesting

films I’ve seen lately because much of the story is open for interpretation. Is Luce a sinner or a saint? Are you wrong for pondering that? The film makes the viewer think about his or her own prejudices and assumptions, allowing you to draw your own conclusions about its meaning and how it relates to race in America. Naomi Watts, who has made many interesting film choices, and Tim Roth star as Luce’s parents. You may also remember their pairing in the American version of the film “Funny Games.” “Luce” is described as another social thriller. Harrison is a skilled actor who can control dialogue like a great singer controls their vocal range, never crossing a line that would give his character’s true intentions away, and always remaining ambiguously intriguing. Link to Trailer

15. Antebellum – I have become a fan of Jordan Peele’s social horror films that explore race in America, such as “Get Out” and “Us.” While this movie is not his, it is part of the horror subgenre he created. With Janelle Monae as author Veronica Henley, who often appears as a nationally televised guest speaker about African American and race issues – the director keeps the audience guessing as he seemingly switches between the past and present. When Monae is kidnapped and becomes disoriented, the viewer – also disoriented – tries to make sense of what has happened to her. Never have I been so happy to see a cell phone actually work in a horror movie. I thought it was brilliantly paced and kept me guessing. It reminded me a lot of M. Night Shyamalan’s “The Village” and “Black Mirror’s” “White Bear” episode. Link to Trailer

16. Coherence – I found “Coherence” in a Reddit list of mind-bending films. After a comet appears, eight friends attending a dinner party begin to experience a mysterious chain of events that involve multiple realities. If you like this one, check out “Another Earth,” starring Brit Marling, who also wrote the film. If you like “Another Earth,” check out Marling’s series “The OA” for more mind-bending drama. Link to Trailer

17. The Dinner – An interesting film about the extremes parents will go to cover up the

misdeeds of their children, and another example of how one event can spiral out of control. Starring Laura Linney, who is good in everything, and Richard Gere. Link to Trailer

18. Neon Demon – This movie offers commentary about mean girl culture and how young women can be eaten alive in the modeling and entertainment industries. It also includes surreal elements, like those you see in “The Killing of a Sacred Deer.” Jesse (Elle Fanning) moves to Los Angeles to become a model, and it’s obvious she has a special quality that provokes envy in others. This light leads her to be adored and victimized. Link to Trailer

19. Greta – Great performances in this film about how being kind can sometimes get you into trouble. When a young woman living in New York finds a purse left on the subway, she returns it to the lonely older owner and forges a friendship. But being friendly can have consequences. Link to Trailer

20. The Lie – Another story about parents covering u

p for their children. After a tragic event involving their daughter, a couple exhausts all efforts to protect her. This film reminded me a little of TikTok’s prank culture, and how oblivious some youth may be about serious situations and the consequences of their actions. Link to Trailer

Movies That Will Give You Thrills and ...