The Top 10 Best Sports Venues in the South 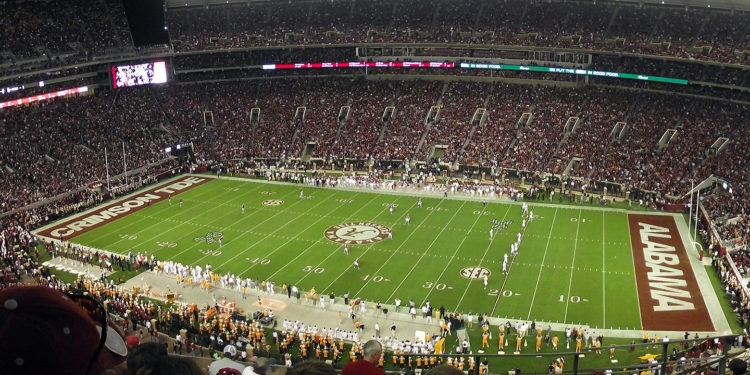 On any given Saturday in many of the major college towns down South, you will find packed stadiums and rabid superfans decked out in team colors living for every play. For those who want to experience some of the madness that is sports in the South, I have compiled a list of some of the best sports venues. They all have something special that separates them from the pack.

10 – Oxford-University Stadium at Swayze Field – Swayze Field is the home of the Ole Miss Rebel baseball team in Oxford, Mississippi. The stadium, built in 1988, has been the site of many regional tournaments and some of the best traditions in college baseball.

The atmosphere is second to none with the stadium ranked top two in attendance for the past four years. Ole Miss senior Katie Davoren said the games are fun for non-sports fans as well.

“It’s an experience just going to the games,” she said. “As a student, the right field student section is always packed and everyone is having a good time.”

The tradition most recognize is the beer showers from the student section. When an Ole Miss player hits a home run or a walk-off base hit, the students throw their drinks high in the air

The NCAA published an article in July of 2019 of the top college baseball stadiums according to fans, and Swayze Field was one of the top choices in that poll.

9 – SunTrust Park – Opened in 2017, SunTrust hosts the Atlanta Braves baseball team. The stadium was constructed to replace the old home of the Braves, Turner Field, built in 1995 in preparation for the Olympics.

SunTrust moved the Braves from their home in downtown Atlanta to the suburb of Cobb County. This was thought to be a closer drive for the majority of Braves fans who regularly attended games.

The stadium holds just over 41,000 fans, but every seat is a good one. The stadium is smaller than some of the other major league ballparks. This is on purpose. However, SunTrust has the highest percentage of seats closest to the field than any other major league stadium, according to an article published in the Atlanta Journal-Constitution.

The stadium features many amenities. It has its own alley of games, like speed pitch and mock bases for kids to run and it holds a Braves baseball museum that highlights several key moments in the franchise’s history.

The stadium is aesthetically pleasing with a water feature built into the center field batter’s eye area equipped with trees and rocks for a beautiful introduction to the stadium. Former clubhouse attendant, Jason Jones said it is one of his favorite stadiums.

“I like SunTrust because of the big open walkways around the field,” he said. “Compared to Turner Field, it was worlds better because everything is open and there is always a breeze coming through.”

Outside the stadium is The Battery, a strip of shops, restaurants, and bars for fans to explore before, after, or during games. This was a major part of the design for the stadium to set it apart from all of the other parks in the country.

“You can go down there hours before a game and go eat at many of the restaurants they have,” Jones said. “That’s something Turner didn’t have.”

8 – Frank Howard Field at Clemson Memorial Stadium – One of two “Death Valleys” on this list, Memorial Stadium is home to the Clemson Tigers football team. The stadium, built in 1942, now holds 81,500 fans.

Along with Clemson football, the stadium has also hosted the Carolina Panthers football team, the Rolling Stones, and Pink Floyd, among other artists. Clemson student Nick Muenchen said there’s nothing like a game day in Death Valley.

“It embraces what makes college football special,” he said. “In what other sport does the team enter by sprinting down a giant hill through the middle of the crowd? Where else do fans of both teams get to run on the field after every game?”

Sprinting down the hill is a famous tradition of Clemson football. Players and coaches are bussed to the top of the hill before every game to touch Howard’s Rock before a cannon sounds and the players all run down the famed hill.

Famous broadcaster Brent Musburger coined it “the most exciting 25 seconds in college football.” With the team’s recent success, you can find the stadium packed just about every home game.

The Crazies are some of sports most rowdy and loud fans, at one point measuring up to 121.3 dB, “which is louder than a power saw at three feet or a jackhammer,” according to an article by Benjamin Wolf in 2018.

The stadium has been ranked as one of the best sporting venues in the world. Sports Illustrated rated it number four in a list of the top 20 sporting venues of the 20th century.

Duke is home to one of the best basketball programs of this century and the atmosphere of the stadium reflects that. Their rivalry game with the University of North Carolina draws record crowds each year, with students camping out in tents months before the game. If you decide to see this spectacle,  I recommend some earplugs or not. It is entirely up to you.

6 – Mercedes-Benz Superdome – The first of two Mercedez Benz-sponsored venues on this list, the Superdome is home to the New Orleans Saints football team and has hosted numerous sporting events like the Sugar Bowl, two Wrestlemanias, and Super Bowls. Opened in 1975, the Superdome holds about 76,000 fans.

In 2005, when Hurricane Katrina devastated New Orleans and the surrounding areas, the dome was used as a shelter of last resort. The stadium was damaged immensely by the storm and was closed for about a year for renovations. The stadium has become one of the most well-known stadiums in the world since the renovations.

Outside of the stadium stands a statue of Steve Gleason, a former Saints player who was a part of the most famous play in Saints’ history by blocking a punt from an Atlanta Falcons kicker in the first game back in the Superdome after Katrina. Gleason was later diagnosed with ALS and has been honored by the Saints many times since.

5 – Mercedes-Benz Stadium –  Mercedez-Benz Stadium is host to the Atlanta Falcons football team and Atlanta United FC of Major League Soccer. The stadium opened in 2017 and holds the world’s largest video board.

The stadium holds about 71,000 fans and contains a retractable roof designed to look like a bird’s nest in relation to the Falcons football team.

The stadium took over for the Georgia Dome, which was home to the Falcons since 1992. The dome was located next to Mercedez-Benz and was later imploded after the completion of the new stadium.

The football team has not played up to their standards and the fans have not filled the stadium to its capacity in a while, but the soccer team is a different story.

Atlanta United won the MLS Cup in 2018, only their second season in existence, and set an attendance record of just over 73,000 fans. The stadium is packed with rabid soccer fans every match chanting and cheering for the entire 90+ minute time.

The stadium has hosted a Super Bowl and other college football games along with several different musical acts like Garth Brooks, Beyonce, and Taylor Swift.

It also has one of the cheapest concessions prices in all of the major sports venues with hot dogs priced at $1.50, burgers at $7.50, and chips and salsa at $2.50.

4 – AT&T Stadium – AT&T Stadium is home to the Dallas Cowboys football team and hosts the Cottonbowl Classic and Big 12 Championship game annually. The stadium, completed in 2009, seats about 80,000 fans, but can hold over 100,000 fans with standing room and is home to the world’s 29th largest video board that stretches from one 20 yard line to the other on football game days. The stadium has hosted motocross events and NBA, boxing, and soccer events.

The experience itself is unlike any other venue, with its own “site-specific artwork” commissioned by 18 different artists. The stadium contains about 3,000 LCD TVs throughout to give fans access to what is going on in the field, even if they aren’t in their seats. The stadium, like Mercedez-Benz Stadium, has a retractable roof.

A fun fact for this stadium: It is said to use more electricity than the entire country of Liberia.

3 – Talladega Superspeedway – So this is one that I have little to no experience on. I am not a NASCAR aficionado. However, this venue is one of the most highly regarded venues in all of sports.

A NASCAR event is something that you have to see to believe, said fan Chandler Rickman.

“Dega is something everyone needs to experience once in their life,” he said. “You don’t have to be a fan of racing to enjoy it. The infield is just a bunch of people having a good time and being around cars that are going 200 MPH.”

I have yet to make my way out to Talledega, but it is one that I personally would like to see before I pass on.

2 – Tiger Stadium – The other Death Valley on this list, Tiger Stadium, is home to the Louisiana State University Tigers football team and holds 102,000 fans. The stadium opened in 1924 and has been host to many memorable college football games.

The stadium, as the sixth-largest stadium in the world, is consistently ranked as one of the best game day experiences by fans and is considered one of the toughest places for opposing teams to play. In 2013, the NCAA ranked Tiger Stadium as the loudest place in all of college football.

Before games, you can get in the stadium early for the LSU band pregame show and hear Garth Brooks’ “Callin Baton Rouge” played over the loudspeaker. LSU student Phillip Brahana said the stadium is the best atmosphere in all of college football.

“Allowing alcohol in the stadium is a major plus, but the thing about Tiger Stadium is that everyone stays the whole game and we cheer nonstop. It’s tough to beat playing ‘Neck’ after the games too.”

“Neck” is a controversial song that is played by the Tiger band after games. Students added some explicit words to the tune that led to the song being banned from the stadium in 2010, but it made a comeback in 2018 thanks to student complaints.

As much as the university tries to keep the vulgarity out of the song, the students still find ways to say the famous line.

1: Bryant – Denny Stadium – The number one on the list might cause me to be ostracized by most, if not all, of my friends, but it can’t be denied that the atmosphere in Alabama’s Bryant-Denny Stadium is something special.

The stadium opened in 1929 and hosts the University of Alabama football team. The stadium seats about 101,000 fans and sits just behind LSU at the eighth-largest stadium in the world.

With the recent success and domination of Alabama’s football program, you can expect to see the stadium packed out just about every single game. The stadium was ranked the toughest place to play by SportingNews, and Bleacher Report ranked it the second-best stadium in the country.

Beau Mckenna, an Alabama student, said the stadium is an amazing environment to watch a game.

“The best part of the games is when they play ‘Dixieland Delight’ at the end of the third quarter,” he said. “The entire stadium sings their hearts out. It’s one of the coolest stadium traditions I’ve been a part of.”

Alabama’s continued success will make this one of the best venues to see a game, and I highly recommend that readers take a trip to Tuscaloosa to experience it. It is unlike any other stadium experience.