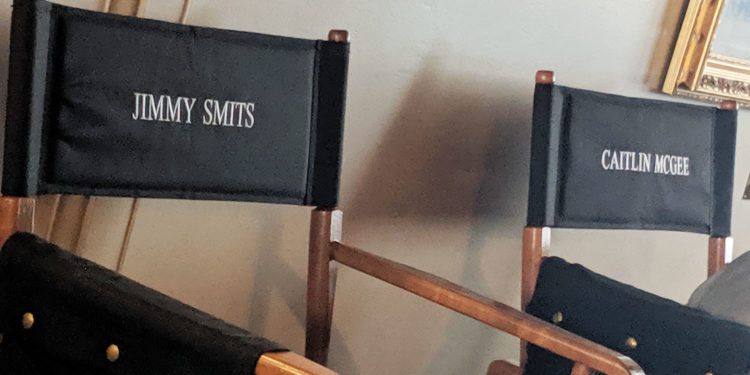 Bluff City Law, a television series about a civil rights law firm, filmed 10 episodes in Memphis that aired in 2019 before it was cancelled. Some lucky locals cast for the show got to have a Hollywood experience in the Mid-South.

The plot from NBC: “Coming from a famous Memphis family known for taking on injustice, brilliant lawyer Sydney Strait worked at her legendary father Elijah’s celebrated law firm until their tumultuous relationship got in the way.

“After barely speaking to her father for years, Sydney is suddenly thrust back into the family fold when her philanthropist mother passes away unexpectedly. In the wake of this loss, Elijah asks Sydney to rejoin his firm, hoping to reconnect with the daughter he loves.

“She agrees because despite her lingering resentment and distrust, she knows that working alongside her father is her best hope at changing the world.”

Michael Ann Dillinger was hired as an extra on the show. She was contacted by casting because she filled out a profile during the filming of “Christmas at Graceland.”

The caller explained that she would be sent an email each day explaining what they were looking for. She had to be on set all day, and since she works from home, she was available.

“Some days, we were only there five or six hours, but some days for 15 to 16,” she said. “If they have to go back and redo a scene, those people who were in the scene still have to be there. Otherwise, it would be a continuity error.”

“I was chosen as a stand-in because I fit the description of one of the actresses in a scene,” she said. “So I would stand in for her while they were setting up the lighting and getting everything ready to shoot that scene. That way, the actress could be going over her lines and preparing for the scene.”

Suzette Carter was also an extra. “They even had me drive my car in one of the scenes,” she said. “There were many days that I sat in there for hours, but since I’m retired, I have the time.”

Dillinger said the show helped Memphis because it created jobs.

“In every scene other than the main characters’, everyone else was local paid extras,” she said. “They also hired caterers to feed everyone, and some sets had to be built, so they had to hire construction people.”

Filming began in July of 2019 and was completed in October. Ratings were not as high as they had hoped. The extras said the actors were kind even though they were told not to approach them because they were often studying lines. Both said different actors came to them and thanked them for their hard work or for staying late.

“I’ll never be able to watch television the same again,” said Carter. “I learned so much about what it takes to make it work.”

Dillinger agreed. “It’s like an orchestra warming up,” she said. “At first, it all sounds like chaos, but when it all comes together and everyone is doing their part, it is like a beautiful symphony.”

“Memphis was really a character in the series,” she said.

Shop For Unique Jewelry at Be on ...