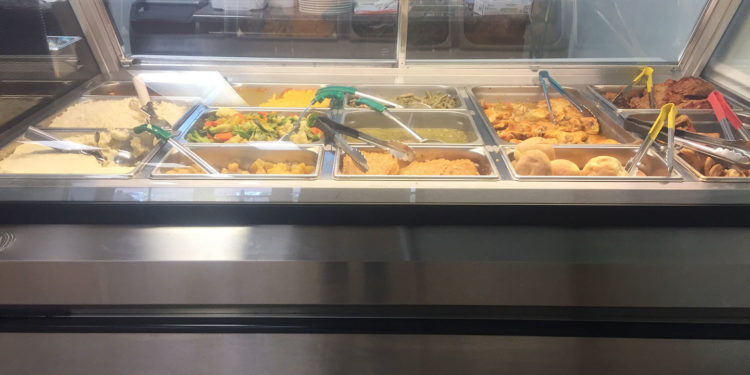 When you think of Southern food, people often envision fried chicken, collards and sweet tea. You can find those things at Amazin Grazin Cafe in Millen, Georgia, population 3,000.

Beth Thompson, owner and chef of Amazin Grazin, creates comfort food. She opened the restaurant in April of 2019 that is connected to her husband’s convenience store. Thompson has been cooking for her entire life.

“I was helping my mother cook and prepare food for the entire family when I was around 6 or 7 years old,” she said. “I have always had a knack for the kitchen …

“I honestly opened Amazin Grazin because so many people kept begging me to open a home-style restaurant. A lot of people knew I could cook well and they were craving something new.

“Everyone in town was flat-out tired of the fast-food places … I wanted to create a place where you could bring your entire family and truly have an amazing meal.”

When you enter Amazin Grazin, you immediately sense an at-home atmosphere. The place is spotless with simple, yet cute decor. There is a chalkboard menu with their cow logo. There is a buffet-style “hot bar” in back where you’ll find fried chicken, fried pork chops, green beans, collard greens, mac and cheese, mashed potatoes, and rolls.

Thompson has a separate section with desserts like Oreo delight, peach cobbler, red velvet cake, and her famous bestseller, chewy cake. If you don’t see anything you like on the “hot bar,” you can order something from the regular menu.

One of the most important things about a business is the brand. Her daughter, Erica Thompson, helped create it.

“We wanted a name and logo that attracted the good, country locals around here, but still attracted the people traveling through Millen,” Erica Thompson said.

It took Beth and Erica many months to come up with a cute, catchy name and logo. They narrowed down the list to a couple of names, but realized one had been copyrighted.

“After we found out that many of the names we were fond of were copyrighted, we knew we had to be clever and unique,” Beth said. “That’s when we came up with Amazin Grazin.”

Erica was charged with decorating the entire restaurant in a a rustic farmhouse style.

“Finding good and honest help has definitely been the most challenging thing as a restaurant owner,” Beth said. “Every time that I thought I had a good group of girls, one would not show up, or someone would quit. Most of the people I hired were high-school girls that needed some extra spending money. I handle mostly everything in the kitchen, so I mainly needed waitresses and help washing dishes and stuff.”

There are also benefits of owning a restaurant.

“Being that Millen is such a small town, I see a lot of familiar faces,” she said. “Most of all my customers are regulars. My favorite day is when different schools from out of town visit Magnolia State Park in Millen and all the children come here and have lunch. I wanted everyone that entered my restaurant to feel like they were a part of my family, and I hope that I have been successful in that aspect.”

Even though Beth said there aren’t many things she would change about her restaurant, she offered the following tips.

“If you are interested in owning or creating a new business, jump with both feet in,” she said. “Pour your entire heart into the business, but also make sure you have a good team behind you.

“Don’t let certain people bring you down with doubtful and negative opinions about your business. If you believe in your business and yourself, you will succeed. A woman can be just as business-savvy as any man can be.”