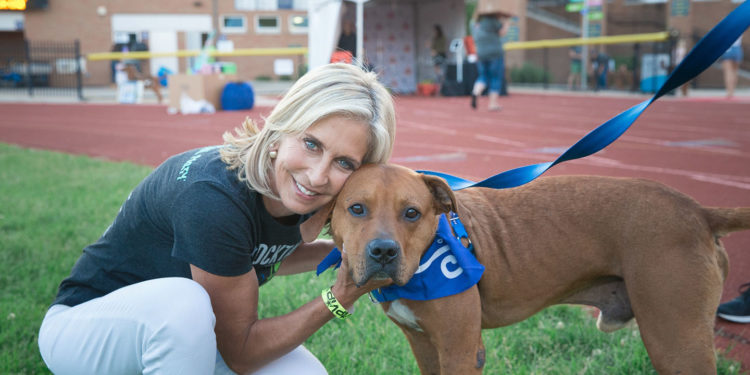 The saying, “a dog is a man’s best friend” rings true for many. Dogs can provide a sense of safety, comfort and joy. However, not all dogs are in happy and loving homes.

According to the American Society for the Prevention of Cruelty to Animals, in the 12th century, the British began fighting dogs for sport and exporting their dogs to other countries to use in pit fights against larger animals like bulls and wild boars.

Even though this practice seems like it would never happen today, it was only outlawed eight years ago. The ASPCA reports that as of 2008, dog fighting is a felony in all 50 states and in the District of Columbia, Guam, Puerto Rico, and the U.S. Virgin Islands. In most states, possessing a dog for the purpose of fighting is also a felony offense.

Dog fighting is just one of many ways dogs are mistreated worldwide, but there are people who are passionate about the issue and are working to end it.

Cathy Bissell is married to the CEO of BISSELL Homecare, Inc. in Grand Rapids, Michigan, and has always loved animals. She grew up with cats and dogs and loved caring for any animal she encountered. As she grew older, she realized the world needed more people like her with compassion for animals.

“For the majority of my life, I was afraid to step foot in an animal shelter,” Bissell said. “I thought it would be too heartbreaking to see so many deserving pets without a home.”

Fortunately, Bissell walked into a shelter one day, and her world was forever changed.

“When I went to the shelter the first time, I met a regal and gentle black Labrador named Bear,” she said. “This dog was perfect. Although I grew up in a house of cats and dogs, adopting Bear was the most pivotal moment of my life because he inspired me to make a difference for thousands of homeless pets.”

Bissell was inspired to help as many animals as she could, so she used her husband’s company to do so. In 2011, Bissell launched an extension to BISSELL Homecare, Inc. called the BISSELL Pet Foundation.

BPF works to help reduce the number of animals in shelters and rescues and find loving homes for every pet. The foundation began in Bissell’s hometown of Grand Rapids, but quickly expanded across the country.

“In just eight years, BPF has grown to partner with 4,783 animal welfare organizations in all 50 states and counting,” Bissell said. “We’ve awarded over $9 million in grant funding for adoption, spay and neuter, emergencies, and other programs to help save pets in shelters and rescues.”

Bissell is very hands-on with the foundation. She goes to shelters, talks to the people who run them, and learns how to make a bigger impact for them. She is also involved in every decision, personally reviewing every request and spending hours on the phone collaborating with shelter directors to find solutions.

Bissell’s work has inspired many people to join this fight, and she has the help of her sister, Janie Jenkins, co-founder and president at Stop Online Puppy Mills, former executive director at The Puppy Mill Project, and director at Chicago French Bulldog rescue.

Clearly the love for dogs runs strong in this family. An issue that Jenkins specifically focuses on is puppy mills, commercial dog breeding facilities where dogs are bred in large quantities so breeders can make a big profit.

“People need to be aware of where their pet is coming from because puppy mill breeders come in all shapes and disguises,” Jenkins said. “With so many puppies purchased from far away or over the internet, people don’t know what the breeding situation is, and they could be supporting something inhumane.

“That’s truly where the issue lies – there’s an overpopulation crisis in shelters, yet people are breeding dogs for profit. This is why it is so important for us to spread the word about adoption and fund our Empty the Shelters adoption events so people will adopt not shop.”

This fight for the humane treatment of animals has even caught the attention of lawmakers. President Donald Trump signed the PACT Act (Preventing Animal Cruelty and Torture), a bill that makes animal cruelty a federal felony.

“This is a step in the right direction, but we have a long way to go,” Bissell said.

She and Jenkins are working hard to help as many animals as possible, but they both emphasized the importance of educating the public about  adoption.

“Every life matters, and there are so many wonderful, deserving pets waiting to be loved in shelters and rescues,” Bissell said.