The steady hum of hood vents and industrial-sized mixing bowls circulate among the stainless steel forest at The Main Event catering and test kitchen on North Lamar Boulevard in Oxford, Mississippi.

It’s like white noise, the only interruptions of virtual silence being an occasional dishwasher cycle or oven timer.

Shuffling over from his prep table to the oven to check on his cake in the oven is Andy McCown, head pastry chef for the City Grocery Restaurant Group. The CGRG is owned and operated by Executive Chef John Currence, and the headlining acts include City Grocery, Snackbar, Big Bad Breakfast, and The Main Event. Chef McCown oversees pastry production for all of them.

McCown recently worked in the sous chef position at Snackbar beside Chef Vishwesh Bhatt, chef de duisine at Snackbar and 2019 James Beard Award winner for Best Chef: South. His transition from Snackbar sous chef to head pastry chef began in June 2019 when the position opened. McCown was the first choice for the job.

“It’s always nice to know that someone smart is up [at The Main Event] making sure everything runs smoothly,” said Bhatt, who has worked with McCown in the CGRG for the past 13 years and describes McCown as “intense, focused, driven, caring,” and above all, “patient.”

Patience is a recurring theme when asked about McCown. It’s not the soft, belittling type of patience you see teachers practice at pre-K; it’s the patience used to ensure everything holds together under pressure.

In any setting that requires teamwork, especially in high volume restaurants, there will also be human error. Food is overcooked, equipment isn’t taken care of properly, orders don’t go out right – the inevitable cocktail of potential missteps is a potent one. 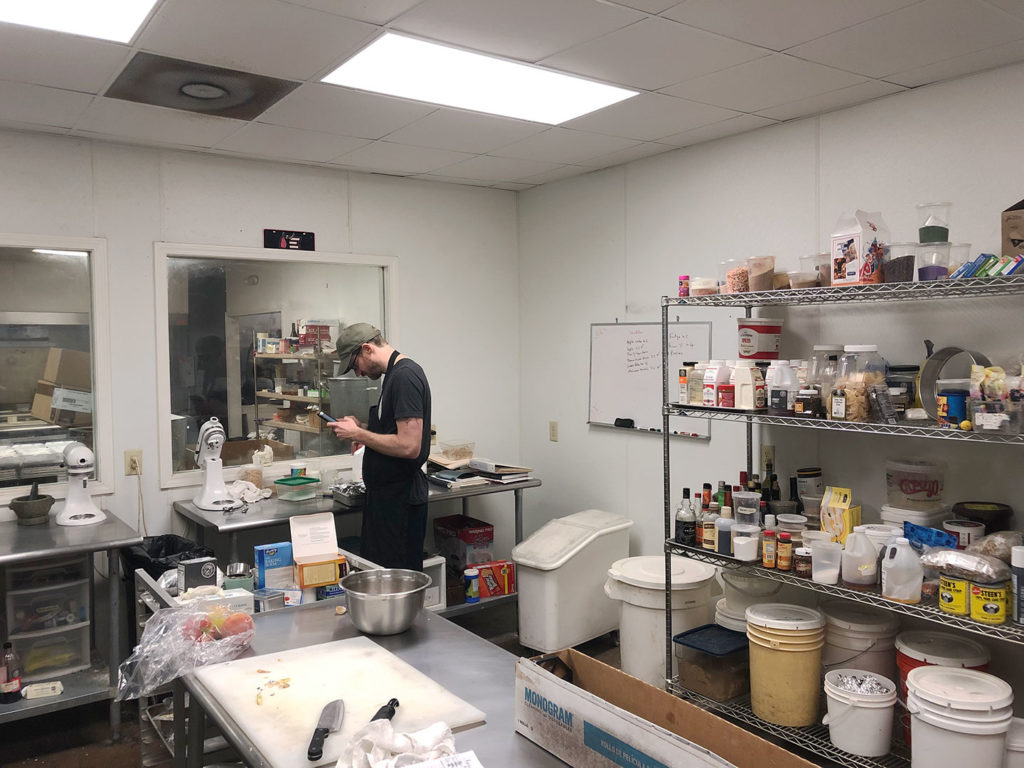 When most in those situations would break down, “Andy would always remain calm. After making you recognize your mistake, he’d immediately say ‘try it this way,’ and everything would continue to run smoothly,” said Rusty Anderson, chef de cuisine at Big Bad Breakfast and co-worker/friend of McCown.

The respect co-workers like Anderson have for McCown is a product of his work in the kitchen.

“I was into it the first few years, then I went to school and always planned to get out of it,” he said. “I never meant for this to be a career.”

McCown stayed because of Currence and Bhatt, both past recipients of the James Beard Award for Best Chef: South. A change in attitude towards food came when McCown began to work more closely with Currence and Bhatt, particularly with prep work, as well as traveling.

After transitioning from the daily grind of being a chef de partie, or line cook, McCown had the eye-opening experience of “seeing dishes from start to finish.”

“That’s when it became a lot more interesting to me,” he said. “Then I started doing research on my own, and I got to travel a bit with John and Vish. That was pretty inspiring to see other people who took [food] seriously.”

Bhatt said McCown has always been a great worker.

“His speed on the line and attention to detail, getting the dishes right, always stood out to us,” Bhatt said.

That attention to detail is an x-factor when working with pastry preparation, which doesn’t allow for on-the-fly improvisation that can be done with savory food. Recipes often measure in the metric system and require more exact measurements like grams that can’t be easily measured through a “pinch” or “handful.”

The seemingly difficult transition from savory to sweet “has been surprisingly fun,” said McCown. “It’s something new, and I can feel myself getting better at it.”

McCown has the tall task of not only preparing dessert menus for two  restaurants (City Grocery and Snackbar), but has to change it up every five to six weeks to stay on pace with what ingredients are in season and the changing menus at the two respective restaurants.

To get inspiration for new menu dishes, McCown will usually “take a look at the restaurants, determine what their style is, and then craft dishes that cater to that style.”

“I try to keep it simple, maybe have some tweaks here and there, think about flavors I know go well from savory foods, and apply that to sweet,” he said.

Further inspiration comes from his mother, his wife, who is also a baker, and the works of critically-acclaimed American Chef Nancy Silverton, who is credited with helping popularize sourdough and artisan breads in the U.S.

But, “more than anything, I’ll just daydream and then Google and see if [the food] is actually something, and just go from there,” said McCown.

While patience and attention to detail have always been present, since starting a family of his own, “He’s so much more focused now more that ever, and that’s a product of caring, both for the food he cooks and the family he cares for,” says Bhatt.

What is McCown’s next goal?

“I’m just trying to get better at techniques for now, and I’ll take care of everything else later,” he said.

Although he’s been described as intense, McCown offered advice for the kitchen and life.

“From what I’ve seen, people let ego make things more frustrating than they should be,” he said. “It’s best to leave that at the door and remember it’s just food; you’re not a rockstar.

“Just have fun. Don’t take yourself too seriously, because that makes everything more frustrating. I’d probably say that about anything.” 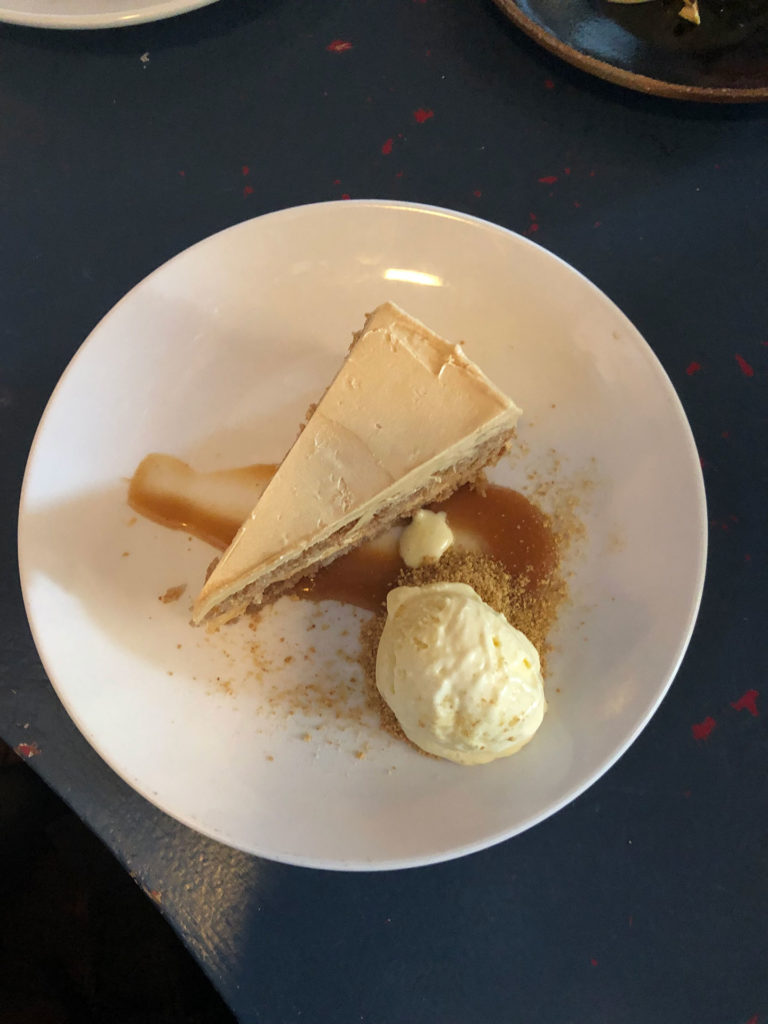 In an industry with as many failures as food-service, this is critical advice. Kitchen work is work that is both mentally and physically taxing on the body. He spends up to 16 hours on any given day grinding through recipes, clocking in at awkward times like midnight, and clocking out 11 a.m. the next day (McCown’s routine for busy football weekends in Oxford) and so on.

Validation is said to be McCown’s main drive.

“I feel like I’m pretty good, and [being a chef] you have a bunch of successes and failures throughout every day, all of which are learning experiences. The successes are worthwhile to me . . . Successes outlast the failures in the long run, and you can’t have one without the other.”

Having the mentality to take failures with grace and overcome them with success help define McCown. His patience, focus, and drive will always power him and those around him to be their best.

“I’d take a bullet for that man,” said Anderson, who worked with McCown at Snackbar for six years prior to him becoming the head man at Big Bad Breakfast.

Austin Aynes, a fellow cook who worked with McCown during his first days at Snackbar, said he was quiet, but determined.

“His actions always spoke louder than his words,” he said.

In a business that requires you to be a craftsman, McCown takes great pride in his work. He credits his successes to everyone who saw him through countless teaching moments, and shares them with those who work with him daily.

As McCown looks down at his third failed attempt of perfecting fudge that day, crestfallen, he takes a deep breath.

“This fudge is going to ruin me,” he said.

The determination and confidence in his eyes said otherwise.