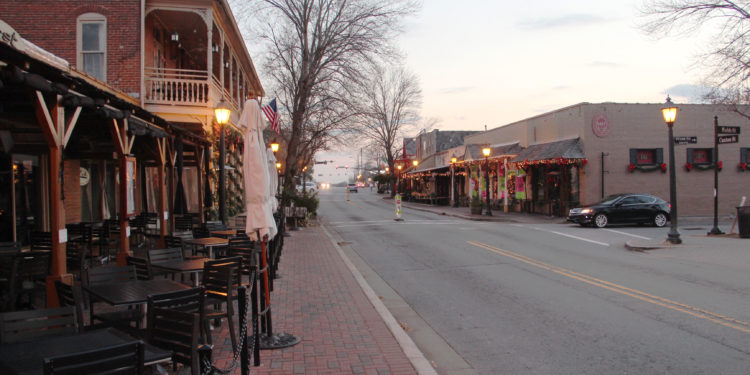 Roswell is a city in north Fulton County, Georgia, my hometown and a special place in my heart. My parents moved to Roswell in 1992 and still live in the same home.

You could eat at a new place in Roswell almost 365 days a year from fine dining to fast food. My favorite restaurant is Lucky’s Burgers and Brews, named after the owner’s dog, Lucky. You can bring your dogs to dinner with you, and they give you a water bowl and dog treats for the puppies.

The Roswell Mill is a notable site. In the Civil War, this was used as a mill to make Confederate uniforms.

Canton Street in Roswell goes through the center of town. Restaurants are endless here. On the last Thursday of every month, they have Alive After Five, a street party with food vendors and beer retailers. The whole town attends.

Verizon Wireless is an outdoor concert venue in north Roswell that has hosted many famous country musicians, from the Zach Brown Band to Jason Aldean, etc.. I have been to at least 10 concerts there. Singers  engage with the crowd and the fun times are endless.

Another hidden gem is a restaurant on Canton Street called Rhea’s Burgers that has been there since the early 1960s. Although they have expanded with more locations, the original is a walk from my house that seats up to 10 people. It’s tucked away behind a convenience store with a little sign. They were going to destroy the building, but it was classified as a historic landmark.

There is nothing better than getting off the highway and driving about 20 minutes to Roswell. Crossing over the river into Roswell and heading down Canton Street is something I look forward to every time I come home.

Roswell is one of the homiest towns I have ever been to because of the people and the places that make it special. If you ever come through Atlanta, stop for a visit.

Eat Slugburgers at the Crossroads in ...