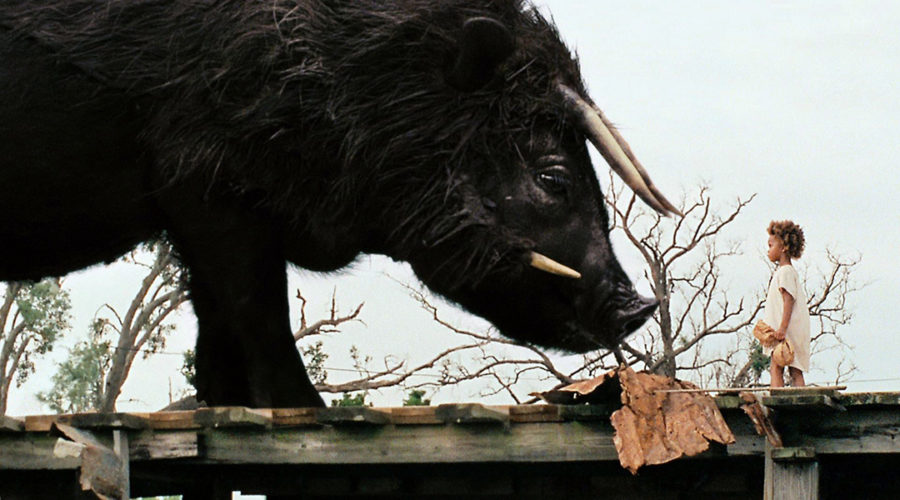 In Beasts of the Southern Wild, a young girl named Hushpuppy, played by Quvenzhane Wallis, lives in an impoverished community off the coast of Louisiana called the Bathtub. The citizens in the Bathtub, of different races and backgrounds, reject the rules and regulations of civilization, but this comes with a cost.

They are left without education, healthcare, and more.

Despite these losses, the citizens, including Hushpuppy and her father, do not feel the urge to modernize like residents on the mainland. They celebrate nightly with alcohol, dancing, and fireworks, even though they are living in trailers and off the trash they receive from the mainland. They are happy, but also realize the dangers of their community. The citizens have nothing to lose, and choose a life of poverty and risk instead of the mainland filled with people with money and help.

The audience sees the community through the eyes and words of a 6-year old. It’s childlike, a little confusing, and joyous. Hushpuppy has lost her mother. Her father, though he loves Hushpuppy, is negligent, abuses alcohol, and is dying. But, Hushpuppy loves and cares for him, even though she has no way to improve their situation.

Hushpuppy speaks like a child, but they are words that connect with the audience.

“When it all goes quiet behind my eyes, I see everything that made me flying around in invisible pieces,” she says. “When I look too hard, it goes away. And when it all goes quiet, I see they are right here. I see that I’m a little piece of a big, big universe, and that makes things right.”

Hushpuppy believes in and celebrates all the people, animals, and community in which she has grown up.

She knows these things that have made her who she truly is.

At “school,” Hushpuppy’s teacher shows the class a tattoo on her leg of an auroch, an extinct animal resembling a giant boar. The teacher says these animals once lived in what used to be the Bathtub. She also warns children that a storm is coming, and it could be the end of their existence.

Hushpuppy faces and befriends the large aurochs who have invaded the Bathtub. This action demonstrates she is fearless and brave enough to fend for herself, even without her father. Although young and far from modern civilization, growing up in the Bathtub has given Hushpuppy more knowledge, wisdom, and experience than any other 6-year old. She understands the big picture and where she and the citizens of the Bathtub fit in it.

There is so much detail, wisdom, and curiosity in this film. I saw this movie with my father, and the relationship between Hushpuppy and her father really spoke to me. Hushpuppy’s father wants to make her strong and teaches her to survive on her own. My father, since the day I was born, has been sharing wisdom so I would become a fierce, fearless, and wise woman.

Beasts of the Southern Wild also says a lot about the South. The idea of a tight-knit, supportive community is not foreign to Southerners. I have been raised by a family who believes in Southern ideals. I have been taught family and friends come first, and we will always be there for those in our community when needed.