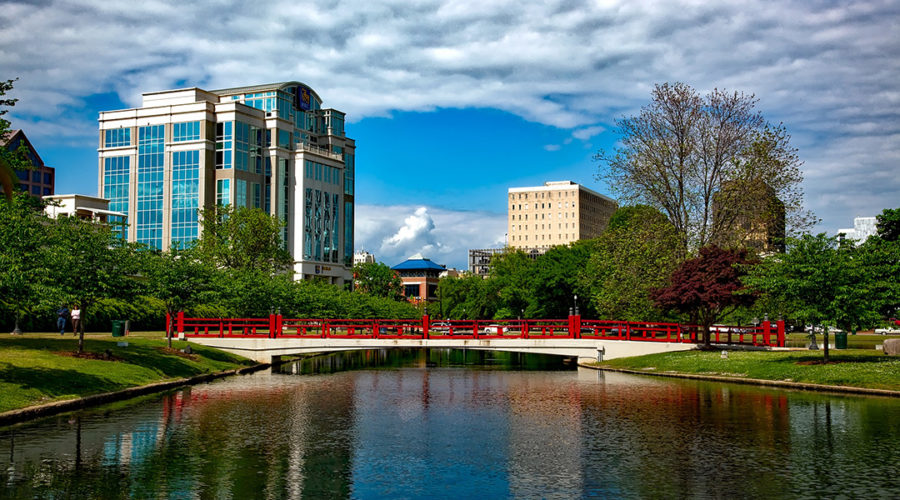 When people think of the Alabama, they may envision Southern charm, football, and the Creedence Clearwater Revival song “Sweet Home Alabama.”

But if you ever find yourself on a flight to Huntsville International Airport, you could be on a plane with Space Camp attendees heading to the U.S. Space and Rocket Center, engineers reporting to the United Launch Alliance, and members of the military traveling to Red Stone Arsenal.

Step out of the airplane and into the airport, and you’ll see pictures of helicopters, rockets, telescopes and space exploration. The U.S. Space and Rocket Center in the middle of Huntsville has one of the nation’s best rocket exhibits and hosts Space Camp, Aviation Challenge and The Marshall Space Flight Center.

According to NASA, Marshall is one of their largest field centers with a workforce of nearly 6,000 and an annual budget of $2.8 billion. Marshall develops rocket engines and tanks for many space shuttles, building parts of the International Space Station, and manages the work of astronauts aboard the space station 24/7. The center also hosts the NASA Human Exploration Rover Challenge and the NASA Student Launch.

The U.S. Space and Rocket Center is a wonderful place to visit, especially for families. The center has countless exhibits, an IMAX theatre, and even rides.

The Davidson Center for Space Exploration, home of a Saturn V rocket, is hosting a German Biergarten featuring German cuisine every Thursday from 4:30 p.m. to 7:30 p.m. until Nov. 21. The center opened a new planetarium in April. It’s also holds daily tours about simulators, history and current and former space exploration.

Space movies and other films are played daily in the IMAX theatre. Outside the center, there are fun rides the whole family will enjoy and rocket displays to explore. For more events, visit the Upcoming Events section of the U.S. Space and Rocket Center website.

Space Camp is also available to children during the summer. Kids from all over the country travel to Huntsville to experience a week of space.

The neighboring Redstone Arsenal was built in 1941 to produce conventional chemical ammunition for World War II. The archives say that it is home to The U.S. Army Aviation and Missile Command, Space and Missile Defense Command, and major components of the Defense Intelligence Agency and Missile Defense Agency. Although the Arsenal is not open for visitors, it is an important part of Northern Alabama’s Space community.

Decatur, Alabama, a town of just around 60,000 people, neighbors Huntsville and is home to United Launch Alliance. According to Made In Alabama, the 1.6 million square feet factory builds rockets and rocket parts for NASA, the Defense Department, and The National Renaissance Office.

ULA has sites around the country, but Decatur has one of the few that produces about a half dozen Delta II and Delta IV rockets a year. Because of the size of ULA, the 1,000 employees ride around on “minions,” or little yellow tricycles.

Take A Film Location Journey Through The ...