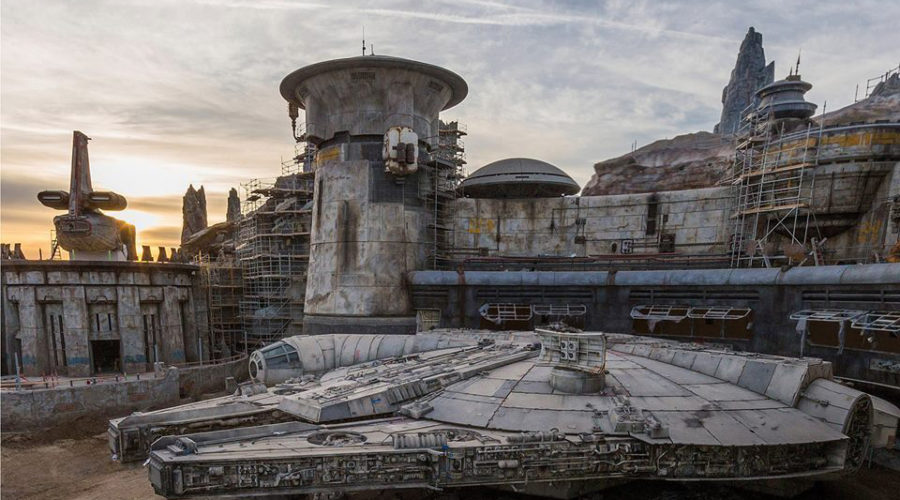 A Galaxy Far, Far, Away is Closer Than You Think

Star Wars: Galaxy’s Edge is a new addition to Disneyland Park in Anaheim, California and Disney’s Hollywood Studios in Lake Buena Vista, Florida. At 14 acres each, Star Wars: Galaxy’s Edge is Disney’s largest single-themed land expansion ever, transporting guests to live their own Star Wars adventures in Black Spire Outpost, a village on the remote planet of Batuu, full of unique sights, sounds, smells and tastes.

Guests can become part of the story as they sample galactic food and beverages, explore an intriguing collection of merchant shops, and take the controls of the most famous ship in the galaxy aboard Millennium Falcon: Smugglers Run.

On Aug. 15, 2015, 7,500 Disney fans from all over the world gathered in a hall at the Anaheim Convention Center across the street from the Disneyland Resort for a moment they had all been waiting for. Chairman and CEO of The Walt Disney Co., Bob Iger, stepped onstage and announced that Star Wars was coming to Walt Disney World and Disneyland Resort.

“I am thrilled to announce the next chapter in the long and exciting history between Disney Parks and Star Wars,” he said. “We are creating a jaw-dropping new world that represents our largest single themed land expansion ever. These new lands at Disneyland and Walt Disney World will transport guests to a whole new Star Wars planet, including an epic Star Wars adventure that puts you in the middle of a climactic battle between the First Order and the Resistance.”

The California and Florida versions of the theme park opened May 31 and Aug. 29, respectively. At an estimated cost of over $2 billion dollars, “Star Wars: Galaxy’s Edge” was designed to be the most immersive Disney Parks experience ever built. Set on the planet Batuu on the outer rim of the galaxy in a village called Black Spire Outpost, guests can live out their Star Wars story.

The backstory of the land is that Black Spire Outpost was once a bustling settlement, but after the invention of lightspeed travel, it was forgotten. It’s now home to smugglers, outlaws, and others who would like to remain hidden. Unfortunately for them, the First Order has recently arrived on the planet, looking for something. What they’re looking for is anyone’s guess, but the Resistance is sure to be hot on their tail.

Here in Black Spire Outpost, under the watchful eyes of First Order Stormtroopers, guests can sip on drinks from around the galaxy at Oga’s Canteen, including the famed blue milk, which will be a “refreshing dairy drink,” but will not be actual milk, according to Disney Imagineering, the arm of the Disney Company that designs the company’s theme parks.

“I can’t wait to try blue milk,” said Taylor Thomas, a Disney Parks blogger. “I don’t know how refreshing dairy will be in the hot Florida sun, but they’ll come up with something.”

Oga’s Canteen is the first location in Disneyland Park, open to the general public, to serve alcohol, although guests are prohibited from leaving the Canteen with their beverage. The only location that served alcohol in the park before this location is Club 33, an exclusive club for which membership costs a reported $50,000-$100,000 plus annual dues.

Guests are invited to build their own lightsaber or droid. The process of building either isn’t a traditional shopping experience. Disney promises to put you in the shoes of a Jedi or Droidsmith and fully immerse you in “your Star Wars story.”

“[The lightsaber] is elegant, and enigmatic,” said Kembe, one of the denizens of Black Spire Outpost and a member of the secretive Gatherers faction. “The saber is a reflection of its builder, with the Force flowing between them.”

Guests can also join up with Hondo Ohnaka’s smuggling company to take control of the fastest ship in the galaxy, the Millennium Falcon, in Millennium Falcon: Smuggler’s Run. This is a first-of-its-kind, fully interactive attraction where six guests will take on the roles of pilots, gunners, and flight engineers as they attempt to transport stolen goods.

“The experience on Millennium Falcon: Smuggler’s Run puts you straight in that cockpit right behind the controls whether you’re one of the pilots or gunners or flight engineers that are keeping the ship operating,” said Scott Trowbridge, creative executive at Walt Disney Imagineering. “It’s gonna be an intense, super fun experience on the fastest ship in the galaxy.”

The second phase of the land includes Star Wars: Rise of Resistance, Disney’s most advanced and intricate attraction ever. It’s also one of the longest Disney attractions ever with some experts saying it’s a 45-minute experience across multiple buildings and ride vehicles.

Anticipation for Star Wars: Galaxy’s Edge was so high that all three Disney-owned hotels at the Disneyland Resort in California were completely booked the night of the grand opening. For the first month of operation in California, guests to the land were required to have reservations to enter the land for a four-hour window of time to explore the world of Star Wars. The only way to guarantee a reservation was to have a room at one of Disney’s three hotels.